This assignment involves analyzing data from a survey of randomly selected people within Bangkok. The survey responses were simulated. The data is saved in a comma delimited file. You must analyze the data to answer the questions below. There is a dataset for each student. Use the last two digits of your student id# to select the data file. The goal of this assignment as with most assignments is to learn. Although each person has his or her own dataset, you may ask people for help. In addition, you must make graphs using excel, supporting your conclusions. Use an alpha= 0.05 for hypothesis testing. The deliverable is a PowerPoint slide of the graph from Excel with your conclusion for each question and place supporting computer output in the appendix. There are two possible answers for each question to be placed on the page with the Excel graph:

For example, imagine the question:  “Is the percent defective less than 13%?”  Sample size 50 and you found the number defective to be 5 of the 50.  Below is an example of an acceptable 2 slides for a single question (thus expecting 20 slides plus 1st page with your name for a total of 21). 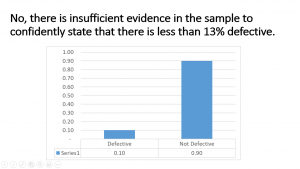 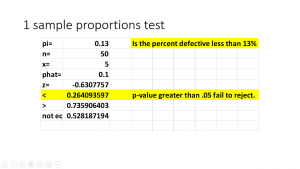 Note: In the data file a “1” means the attribute has the property and a “0” represents
the attribute does not have the property. For gender a “1” represents a male. The
material covered in this chapter is not enough to answer all the questions below.
Some questions may require ANOVA and Chi-Squared test, which might not have been covered yet. If not those topics will be covered soon.